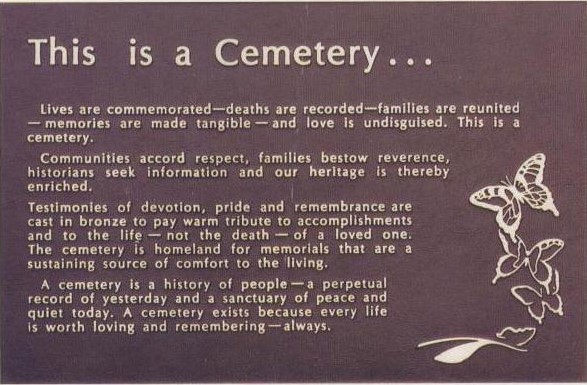 As children, most of us were introduced to cemeteries with sadness and mourning of the loss  of a loved one, ghosts and zombies from a frightening movie, or mystery and the unknown  of death itself. Each of these combinations are perceived as negative, scary, and repulsive.  It’s very true there is no way to know what happens after death. Will we live forever in paradise, be reincarnated as a lion, or simply cease to exist? However, we cannot let that take away from the serenity, peacefulness, and the opportunity to learn and grow from those who have come before us.

We have an innate tendency to fear the unknown, but a cemetery was never meant to be fearful, in fact its purpose was near opposite. Cemeteries are meant to remember, to bring closeness to loved ones.  Graveyards are meant to inform and remind those living now, of the past, and the people who have come before, of their lives, and accomplishments.

The truth is that cemeteries are not the root of the fear, but have innocently played the scapegoat for the past century or more. The fear is of our own understanding, or lack of understanding of what happens at the end of our days here on earth. We too often have thought of death of something that happens to us, not as something that eventually happens. We play the victim of the grim reaper, as if death is an enemy out to get us. “If death is a natural counterpart to life, there’s nothing we can do about it in the end.”

If we can begin to look at cemeteries for the societal and emotional benefit they were created for, instead of the frightening crypts of our imagination; we can grow to appreciate and learn from the past in a new way. Along with this appreciation, we can come closer to the peace that is found in the rolling hills of a cemetery.